We are delighted to be holding the ECOO autumn General Assembly meetings from 14-16 October 2022 in Malta.

Please find below all the practical information you need to register and to book your stay.

The meeting will be held in Sliema, Malta. The main conference venue is The Palace Hotel, which provides all the meeting room facilities. The adjoining Victoria Hotel provides additional accommodation options (see next section). 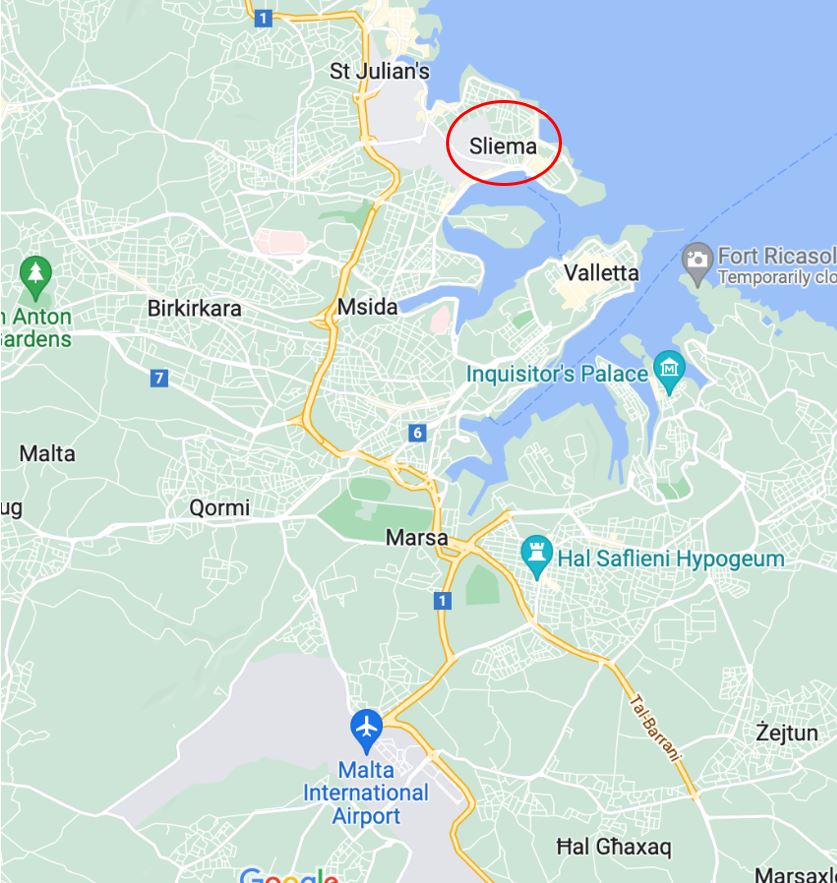 You may stay in the conference venue, The Palace Hotel, or in the Victoria Hotel, which is right next to the Palace Hotel and directly connected to it.

The Palace Hotel rates are:

The Victoria Hotel rates are:

How to get to the venue from the airport

There are two main options to reach the conference venue/hotels.

Payment is made via the credit card system provided in a link that will be sent to you once you have completed the registration form.

The detailed agendas for each meeting will be made available to members one month ahead of the meetings.

All cancellations must be addressed to the Malta Association for Optometrists by sending an e-mail to elisa@ecmeetings.com

Sliema is a coastal town situated on the northeast of Malta, adjacent to St. Julians. Once the home of Malta’s aristocracy, it has now become a major commercial area, very popular for shopping, bars, cafes, restaurants and hotels. It is also quite a large residential town with a population of around 15,000 locals; housing also a significant number of expatriates that reside there temporarily.

Sliema acquired its name from a chapel dedicated to The Our Lady of The Sea (or Stella Maris), built in 1855, which served as a reference point to the fishermen who inhabited the area. The name is linked to the opening words of the Hail Mary prayer, which in Maltese are “Sliem Għalik Marija”. Sliem is the Maltese word meaning peace or serenity.

Sliema was once a quiet fishing village, a minor summer resort that hosted the wealthier Valletta residents. The 19th century, however, saw the development of Sliema; it quickly grew into a residential area, adjoining neighbouring St. Julians. Elegant villas and town houses, as well as many Victorian buildings, were built by the British along the promenade overlooking the rocky coastline.

Soon, the people of Sliema understood the tourism potential of the area, and so they began a building boom that changed the whole landscape. Sliema became the first tourist resort in Malta, and its importance still remains. Nowadays, only a few Victorian and art nouveau houses remain, the rest have been replaced by modern apartment blocks, establishments and hotels.

From one side, the Sliema promontory offers spectacular views across to Valletta, and from the other side, there are breathtaking open sea views. The promenade that stretches for a couple of kilometres is ideal for long walks or runs, while the various benches provide a place for the locals to relax and socialize during warm summer evenings. The Sliema coastline also boasts the Independence Garden, completed with a children’s playground, as well as two fortifications: a De Redin tower built in the 17th century to protect the islands against sea attacks; and another tower that was built by the British in a neo-gothic style in the 1880s.

Sliema, what to do and see for accompanying people

For any questions on the venue, registration or payment,  please contact pauline@ecmeetings.com

For any other queries on the organisation or location please contact The Malta Association of Optometrists: kerstiengabarretta@gmail.com

For any questions on the hotel booking, please contact Ms. Ilona Busuttil: ilona.busuttil@axhotelsmalta.com